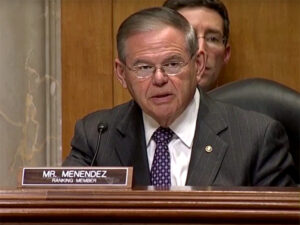 After citing Turkey’s support for Azerbaijan’s attacks – and war crimes – against Artsakh; its destabilizing actions in Syria and Libya; invasion of territorial waters of Cyprus; claims on Greece’s exclusive economic zone; and ongoing crackdown on journalists and lawyers, Senator Menendez asked Blinken if the Biden Administration is “clear-eyed about Turkey under Erdogan.” Blinken responded, “we are very clear-eyed.  Turkey is an ally, that in many ways you said, is not acting as an ally should.  This is a very significant challenge for us and we are very clear-eyed about it.”

Video of the Menendez-Blinken exchange is available on the ANCA YouTube page here:
https://youtu.be/69dknkAiD3c

“We welcome Secretary-designate Blinken’s assertion that the Biden Administration will be ‘clear-eyed’ about Ankara,” said ANCA Executive Director Aram Hamparian. “For far too long, U.S. policies on Artsakh, the Armenian Genocide, Cyprus, the Kurds, and Christians have been written in Ankara, exported to Washington, advanced by foreign lobbyists, and then enforced by American presidents of both parties. That has to end. We will remain vigilant – along with our community and coalition partners – to ensure that, moving forward, U.S. policies serve actual American interests.”

Sen. Menendez went on to note that “President Trump, in my opinion, coddled Erdogan, and he [Erdogan] continued to move forward in all of these pejorative ways.”

Regarding U.S. policy on the Armenian Genocide, Senator Bob Menendez called on the Biden Administration to follow Congress’ lead and properly commemorate this crime.

“I find it so difficult to have our Ambassadors to Armenia go to a Genocide observance and never say the word ‘Genocide.’ That is something I hope will change,” said Senator Menendez, who championed the unanimous passage of bipartisan Armenian Genocide legislation in December 2019.  The U.S. House almost unanimously adopted similar legislation in October 2019.

Video of Sen. Menendez’s remarks on the Armenian Genocide is available here:
https://youtu.be/wjW7coGKYz4 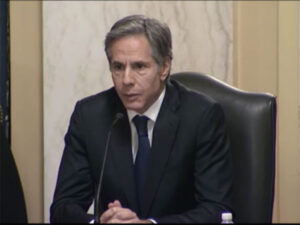 Department-Senate Foreign Relations Committee oversight of U.S. arms sales.  “Speaking for myself, I have no ideological problems with arms sales of the U.S. makers to other countries abroad when those countries observe the human rights and international law that we–we aspire to uphold globally,” said Sen. Menendez. “When they don’t, then I had problems with it, and that’s where a dialogue has to come to play with the State Department.”

Last year, alarmed by a U.S. military aid program to Azerbaijan that had “skyrocketed” to more than $120 million since 2016, Sen. Menendez formally requested that the Government Accountability Office (GAO) provide the Senate Foreign Relations Committee with a detailed report on this assistance program and its compliance with Section 907 of the Freedom Support Act restrictions on U.S. aid to Baku.  The ANCA is calling on the Administration and Congress to zero out military aid to Azerbaijan.

In response to Sen. Lindsay Graham (R-SC), a question about the continuation of U.S. sanctions on Turkey for purchasing the Russian made S-400 system, Blinken responded:  “I think that what Turkey has done as a NATO ally in acquiring the S-400s is unacceptable. The idea that today’s strategic so-called strategic partner of ours would actually be in line with one of our biggest strategic competitors in Russia is not acceptable. I think we need to take a look and see the impact the existing sanctions have had and then determine whether there’s more that needs to be done.”

Responding to Sen. Ben Cardin’s (D-MD) calls to strengthen the Magnitsky Global Sanction regime, used to hold leaders accountable for gross violations of human rights and corruption,” Blinken responded: “I think this has been a great achievement, Senator, of yours and of this committee. We have gone from Magnitsky to Global Magnitsky to different countries now adopting their own Magnitsky-like laws and now just recently the European Union, so I think this has been a tremendous success story in actually bringing the democratic countries of the world together and giving them an effective tool to actually push back against abuses of democracy and human rights.”

The ANCA continues to call on Members of Congress and the President to use the Global Magnitsky Act to hold Azerbaijani leaders accountable for war crimes, including the launching of cluster bombs against Armenian civilians in the Artsakh Republic.  Among the targets identified by the ANCA are: President Ilham Aliyev, Defense Minister Zakir Hasanov, Chief of the General Staff Sadikov Najmeddin Huseynoglu, Deputy Minister of Defense (Army) Mustafayev Kerem Narimanoglu, and Deputy Minister of Defense (Air Force) Tairov Ramiz Firudinoglu.

Blinken is expected to be confirmed as Secretary of State by the full Senate in the next week.