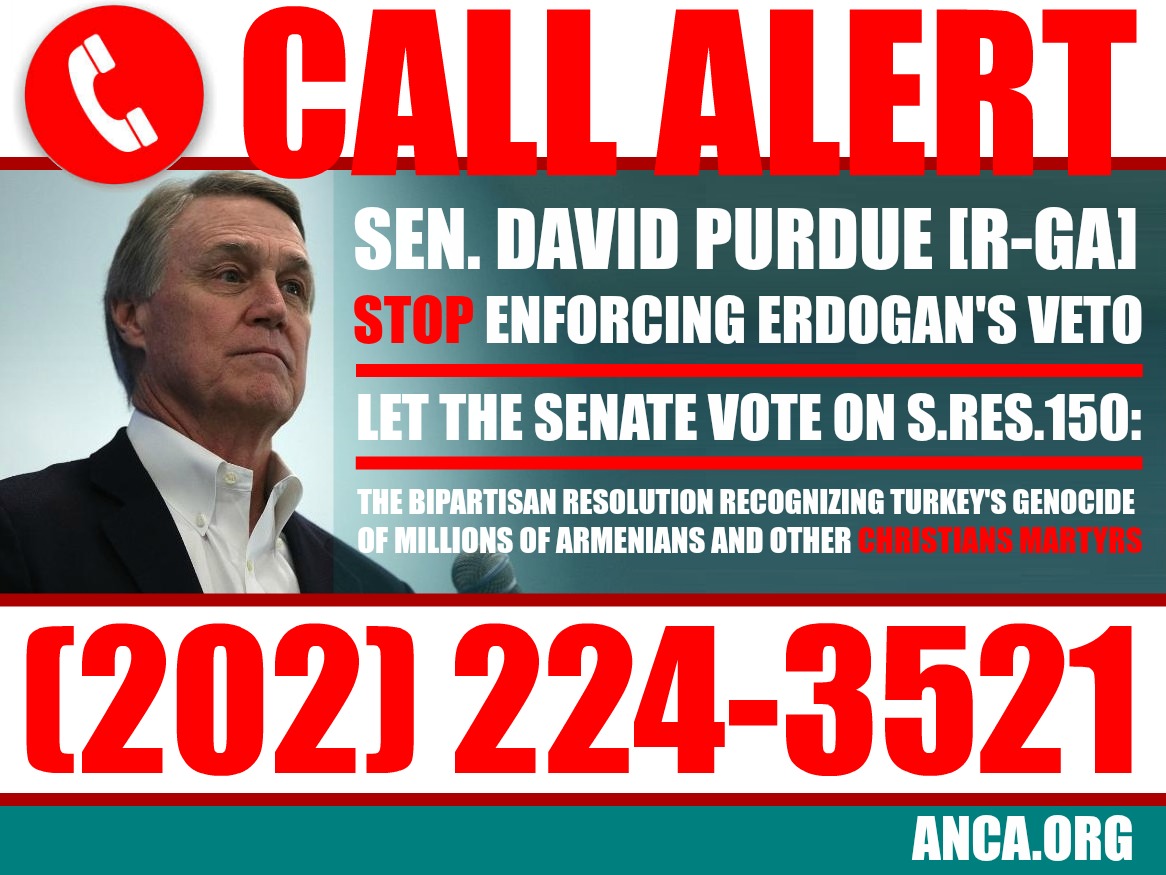 “If Senator Purdue and a handful of his colleagues want to vote against S.Res.150, they should vote against S.Res.150, but not prevent the vast majority of their Senate colleagues from voting for this bipartisan resolution,” said ANCA Executive Director Aram Hamparian. “We thank Senators Menendez and Cruz for their escalating pressure for a vote on the Armenian Genocide Resolution, and stand with them – and the growing bipartisan list of cosponsors – in doing all we can to over-ride Ankara’s veto in the U.S. Senate.”

Senators Menendez and Cruz made their request on the floor of the U.S. Senate, using a parliamentary procedure to fast-track consideration of S.Res.150, in the wake of the near-unanimous adoption of an identical resolution in the U.S. House, H.Res.296, on October 29th. Last week, only Senator Graham took to the floor to object to expedite passage of S.Res.150. Senators can present the resolution for unanimous consent as often as needed as part of a coordinated strategy to secure its passage.

In powerful remarks on the Senate floor, Senator Menendez read from State Department cables sent by U.S. Ambassador Henry Morgenthau, U.S. Consul Jesse Jackson, and U.S. Ambassador Abram Elkus describing the events of the Armenian Genocide. “American officials, those with a credible and legitimate understanding of what took place made these statements – they are part of the historical record. They mark one of the prouder moments in the history of the State Department and our diplomacy,” explained Senator Menendez. He also cited that 28 countries – 11 NATO allies – have also recognized the Armenian Genocide, noting “none of them have ruptured their relationship with Turkey; none of them have ended their relationship with Turkey, as it relates to recognizing the Armenian Genocide as a historical fact. Why is the greatest country of on the face of this Earth – the United States of America – incapable, incapable of doing this when 11 other NATO countries have?”

Sen. Cruz, who was among a small group of Senators who met with President Trump and Erdogan last week, noted that affirming the Armenian Genocide is not incompatible to working with Turkey today. “Friends and allies can speak the truth and we are not honoring America and who we stand for if we are afraid to speak the truth and willing to participate in covering it up. We have a moral duty to acknowledge what happened to 1.5 million innocent souls. It is the right thing to do and it’s my hope that the Senate will do so in a bipartisan manner,” said Sen. Cruz.

Despite these powerful entreaties, Sen. Perdue, citing Erdogan’s meeting with President Trump last week, and the meeting between Secretary of State Pompeo and Turkish leaders in Belgium yesterday objected to the unanimous consent request and argued that it is not the right time for the Senate to take up the measure. The ANCA has issued a nationwide call alert to share the disappointment with Sen. Perdue’s opposition and encourage him to allow a vote on the Armenian Genocide Resolution. Senator Perdue may be reached at (202) 224-3521.

The complete video of the exchange between Senators Menendez, Cruz, and Perdue, followed by ANCA analysis by Executive Director Aram Hamparian is available on Facebook, Twitter, and the ANCA YouTube Channel at: https://youtu.be/03QVlgDoRuk