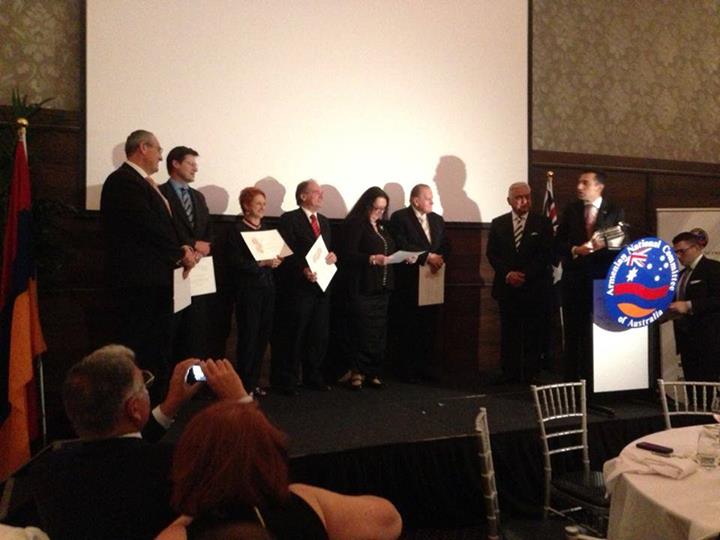 SYDNEY: The Armenian National Committee of Australia (ANC Australia) completed its most successful Advocacy Week to date by raising $85,000 at its Annual Banquet. This completed a week which included high profile meetings and events featuring international guest of honour, the former United States Ambassador to Armenia, John Evans.

During ANC Australia Advocacy Week, Evans gave numerous talks in Sydney and Melbourne. He held numerous high-level meetings with Members of the Federal Parliament on various issues including Armenian Genocide recognition and trade relations with Armenia. Evans also joined a panel discussion, organised by the Armenian Youth Federation of Australia, held at the Urban Hotel with the Hon. Marie Ficarra MLC, Mr. Sassoon Grigorian and Mr. Vache Kahramanian, who discussed the issue of Genocide Denial and the Path to Recognition.

The signature event to conclude the week was the ANC Australia Annual Banquet, held at Miramare Gardens with a capacity crowd of supporters in attendance. Throughout the evening, over $85,000 was raised to help fund the activities of the community’s peak public affairs committee throughout 2014.

Ambassador Evans delivered the keynote address to a standing ovation recounting his personal experiences as Ambassador to Armenia, a post from which he was removed by the Bush Administration after affirming the historical reality of the Armenian Genocide.

The NSW Parliamentary trip to Armenia and Nagorno-Karabakh, led by ANC Australia in July, was a key theme of the evening, with ANC Australia and the community paying tribute to the seven Members of the NSW Parliament who took part. In their honour, individual trees were planted in Armenia as a token of appreciation on behalf of the Armenian-Australian community.

Other key themes presented on the night was a reflection of the successful 2013 launch of the ANC Australia Professional Network and the unprecedented positive media coverage received for the Armenian cause in Australian mass press over recent months.

At the conclusion of the week, ANC Australia Executive Director Vache Kahramanian remarked: “This evening brings the end to one of the most successful Advocacy Weeks held to date. Over the past twelve months ANC Australia has continued to demonstrate the vital importance of the work it does in ensuring a stronger Armenia, an independent Artsakh, and a strong and vibrant Armenian-Australian community.”

ANC Austalia’s Community Relations Director, Stephen Abolakian said: “Tonight is a clear testament to the strength of the community and its full-fledged support of the ANC. We are deeply humbled by the ongoing support which is vital for our continued success.”