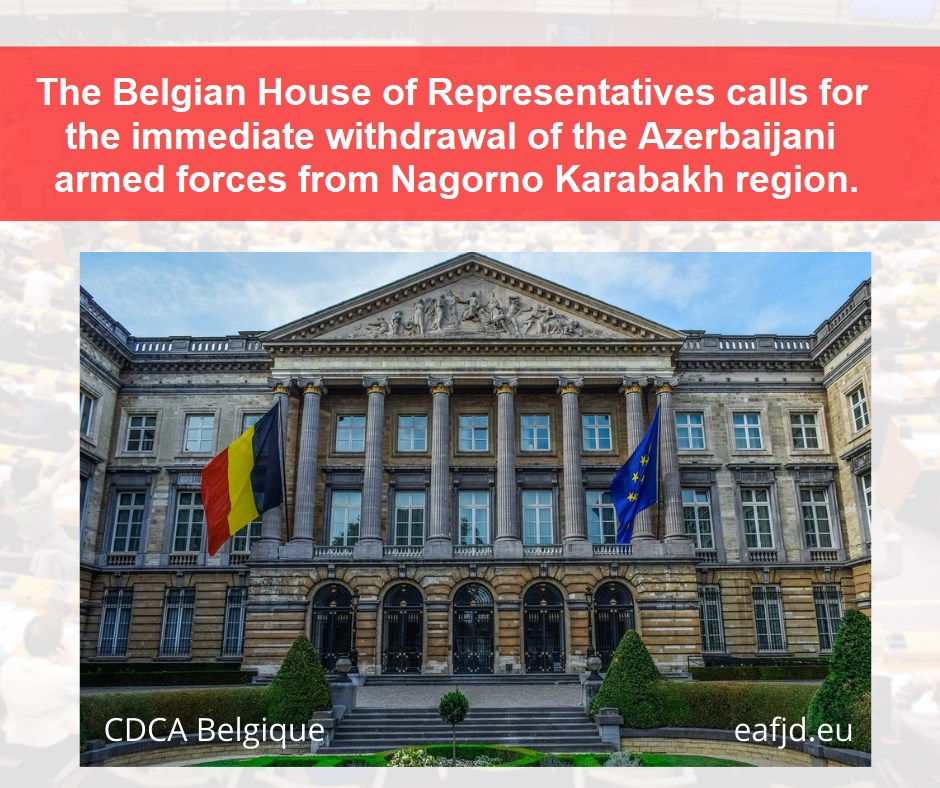 The European Armenian Federation of Justice and Democracy (EAFJD) informs

that The Belgian House of Representatives (Federal Parliament) adopted the resolution condemning the military aggression of Azerbaijan, supported by the Turkish authorities and foreign mercenaries against the Armenian population of the Republic of Artsakh. The resolution calls for the immediate withdrawal of the Azerbaijani armed forces from Nagorno Karabakh region, conquered by the use of force and violence.

The Parliament also condemned the Azerbaijani deliberate attacks against 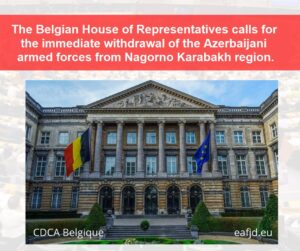 civilians and the use of cluster munitions and phosphorus bombs.
The resolution mentions that in addition to the right to self-determination of the Armenian population of Artsakh, the principle of non-use of force, the other basic principle of the OSCE Minsk group, was violated by Azerbaijan.

As the final status of Artsakh was not mentioned in the ceasefire declaration signed on November 9, the Chamber calls on the Belgian Government to support the resumption of the negotiations, under the auspices of the OSCE Minsk Group, in order to find a compromise on the final status of Nagorno Karabakh, taking mainly into account the right to self-determination of the people of Artsakh.

The Chamber calls on the Belgian Government to demand that Turkey no longer interferes militarily in the conflict and stops playing a destabilizing role in the Caucasus region, especially by putting an end to the transfer or installation of Syrian mercenaries and jihadists in Nagorno Karabakh, and organizing their immediate withdrawal from the region. According to the resolution, any interference by Turkey in the ceasefire monitoring mission will be seen as dangerous for the safety of the local population. Such mechanism is meant to be implemented within the framework of the OSCE Minsk Group.

The EAFJD welcomes also the fact that the Chamber asks the Federal Government to contribute, with its European partners, in the reconstruction of the destroyed or damaged cities of Artsakh and to provide humanitarian aid to the the local population and all the families of the victims and refugees. The Government is also asked to support UNESCO’s mission in preserving the architectural and religious heritage located in the areas of Artsakh now occupied by Azerbaijan.

The resolution calls for the immediate release of all prisoners of war. Therefore, the Chamber condemns in the strongest terms the execution of prisoners of war and demands the prosecution and punishment of the perpetrators of these crimes.